Why are fire ants a public health threat?
Fire ants are very aggressive and can inflict a painful sting.

How are the nests of fire ants vs. harvester ants different?
The nests of mature fire ant colony are a dome-shaped mound up to 3 feet in diameter and 1-½ feet high. Harvester ant nests are flat or only slightly raised, and the surrounding ground is defoliated.

Why are honeybees able to sting a person only once?

Because when a honeybee stings a human or other large mammal, the stinger, poison sac, surrounding muscles, and nerves are torn from the bee’s body, causing death.

List several things that can increase the defensive behavior of bees.
Sudden and rapid movements, Jarring or bumping hives or frames, Vibrations and noise such as from lawn mowers or tractors. Odors (both good and bad), Dark colors, Cooler, cloudy weather

In what situation might bumble bees become a nuisance to people?
When they build their nests too close to human activity.

What materials does the furniture carpet beetle infest?
Females lay eggs in a wide variety of places, including upholstered furniture, clothing, animal trophies, rugs, cracks and crevices, and on dead insects and rodent bait.

What part of a urticating (stinging) caterpillar is poisonous?
The external spines or hairs. These spines can cause a rash or other skin irritation on people who touch them.

Where are people most likely to encounter stinging caterpillars?
Around ornamental trees, shrubs, and other plants that they are feeding on.

Which species of stinging caterpillar are the greatest threat to people?
The puss caterpillar.

Why are cockroaches a public health threat?
Cockroach-related health problems include asthma, allergies, and disease transmission.   This can result in direct contact with humans and possible direct transmission of pathogens.

Are male or female cockroaches more active?
Males and large nymphs are usually the most active. They are the ones people see most often.

Why are fleas a threat to public health?
Because of their irritating bites, abundance, and ability to transmit diseases

Are all people equally attractive to fleas?
No. For example, in a flea-infested house, one or two people may show severe irritation from fleabites. Others may not even realize that fleas are present.

Why do some flies threaten public health?

In this country, flies can be a major source of diarrhea-type illnesses and occasional eye disorder (such as pinkeye). Because some flies often live and/or feed on human feces, they can become involved intestinal disease cycles. Besides being annoying, some biting fly species may transmit pathogens cause tularemia. Flies can also contaminate food by transferring filth from their breeding and egg-laying sites to human food.

Name several species of flies that normally overwinter as adults.

You find small flies with bright red eyes swarming around a bowl of ripe fruit in a kitchen. What type of flies are they?
Fruit flies

What do grasshoppers feed on?
Lettuce, potato, beans and corn.

What crops can grasshoppers damage?
When abundant, they may destroy complete plantings of such crops as lettuce and potato.

What do grasshoppers look like?
Colors of grasshoppers include brown, gray, black, or yellow. Grasshoppers have strong hind legs and can up to 2 inches long.

At what time(s) of year are homeowners most likely to find multicolored Asian lady beetles inside their houses?
In the fall (mid-October) and spring (late march).

What do locusts look like?
Adult locust are conspicuous black and yellow beetles. They have long black antennae and reddish legs. There are generally 0.50 to 1 inch long.

How can locusts cause damage?
Locust borer attacks only black locust. Repeated infestations over time lead to the loss of the timber’s value for use as fence posts or firewood.

Explain why mice and rats are considered pests.
They eat food intended for humans or livestock. They contaminate more than they eat, causing waste and economic loss.

Describe the life cycle of the house mouse.
Females breed three to six weeks after giving birth. They produce about six litters each year, with six to eight young per litter. House mice reach sexual in about 35 days.

What type of health problems can chicken mite cause if it attacks a human?
Mild dermatitis and itching

Which mite species is most likely to attack a person if he or she sits or lies down in an infested lawn?
The chigger.

List several places that the itch mite commonly attacks people.
Between the fingers, In the folds at the wrists, At the bend of the elbow or knee.

Why are mosquitoes a threat to public health?
Because adult females of many species can transmit diseases and parasites while they feed. Many these diseases can cause serious illness or even death.

What are the two main categories of larval habitats?
Standing water (permanent and transient) and floodwater (including natural and artificial containers as well as floodwater).

Why are caterpillars a nuisance?
Caterpillars have stinger hairs that contain poison.

How do adult buck months eat?
They do not feed because they don’t have mouths.
Common Host Plants Caterpillars are usually found on oak trees, but may be found on willow, hazelnut, cherry, and rose as well.
Buck moth caterpillars are a nuisance because of their stinging hairs. A person “stung” by a poisonous caterpillar should immediately wash the affected area to remove any insect hairs and poison that remain. An ice pack will help reduce swelling. People known to be sensitive to insect stings should consult a physician.
Adult buck moths have no functional mouthparts and do not feed.

Explain why mice and rats are considered pests.
They eat food intended for humans or livestock. They contaminate more than they eat, causing waste and economic loss. They damage non-food products while gathering nest material, especially stored paper, bedding, and clothes.

What sorts of foods do roof rats prefer?
Seeds, cereal grains, vegetables, or fruits. However, they will eat almost anything.

What kinds of foods do Norway rats prefer?
Food with high protein content, like meat, fish, nuts, cheese, and pet food. However, they will eat almost any food used by humans or livestock.

What type of food do silverfish feed on?
Dried meats, starch, cotton, sugar, mold, and outdoor insects such as lichens.

When and where might you run across a black widow spider?

When inspecting crawl spaces, porches, garages, and sheds for other pests. Black widows spiders hide in stacked pots or baskets, firewood piles, rodent burrows, water meters, stacked boards, under brick and stones, and in similar locations. However, people may bring them inside, or the young may move inside on ground floors.

Describe the appearance of a brown recluse spider.
The brown recluse is smaller than the black widow. it has an oval abdomen instead of a round one. The abdomen is uniformly tan to brown without marking. A dark, fiddle-shaped mark is obvious on the cephalothorax. The broad base of the fiddle begins at the eyes and the narrow fiddleneck ends just above the attachment of the abdomen. The legs of the brown recluse are long, with the second pair longer than the first.

What type of trees do termites generally feed?
Douglas fir and other common building timbers.

When is termite swarming season?
Generally, in the spring, and sometimes in the summer. General soil temperatures are around 70°F.

Do termites need large gaps to enter into buildings?
No. Termites can enter building cracks and gaps less than 1/16” wide.

Do both sexes of ticks take a blood meal?
Yes. However, male ticks do not feed for as long enlarge as much as females do.

What is questing?
When a tick climbs a plant, stretches out its front pair of legs, and waits for a host to pass by that it can grasp onto. 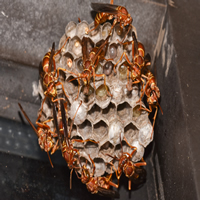 Where do people often encounter yellow jackets?
At picnic areas, orchards, or around garbage bins where the insects are foraging for food.

When are yellow jackets and bald-faced hornets the most aggressive?
When you get too close to their nests, especially in the late summer and fall.